This week our student column team write the opening piece to our school blog.

As we all know, June is a very important month as it is pride month. It is celebrated internationally with lots of love and passion. Pride month is celebrated in June due to it being the month when the Stonewall riots took place. These were very important protests in 1969 in the U.S. that changed lots of gay rights for people in America and across the world.

Pride is a celebration of people coming together in love and friendship, to show how far LGBTQ+ rights have come, and how in some places there’s still work to be done.

LGBT+ stands for lesbian, gay, bisexual and transgender. The + is an inclusive symbol to mean ‘and others’ to include people of all identities.

Pride is all about being proud of who you are no matter who you love.

This month, Google Doodle has honoured Frank Kameny, a gay rights activist and astronomer. He fought endlessly for pride. He saw combat during World War II and upon his return to the U.S. obtained a doctorate in astronomy at Harvard University. In 1957, Kameny accepted a job as an astronomer with the Army Map Service, but he was fired just months later based on an executive order effectively barring members of the LGBTQ community from federal employment.

In response to his termination, Kameny sued the federal government and in 1961 filed the first gay rights appeal to the U.S. Supreme Court. Denied but undeterred, Kameny embarked upon a lifelong fight for equal rights. Years before the Stonewall Riots, he organized one of the country’s first gay rights advocacy groups. In the early ‘70s, he also successfully challenged the American Psychiatric Association’s classification of homosexuality as a mental disorder, and in 1975, the Civil Service Commission finally reversed its ban on LGBTQ employees.

In 2009, over 50 years after his dismissal, Kameny received a formal apology from the U.S. government. In June 2010, Washington D.C. named a stretch of 17th Street NW near Dupont Circle “Frank Kameny Way” in his honour. An update on a story we first featured on 7 May.

Sophie, pictured below receiving her Head teacher’s Personal Achievement Award back in May, was the winner of our Heroes competition.

She designed a badge for the Armed Forces Day in Plymouth this year. We were so pleased, but not surprised, that Sophie won with her stunning design.

“I knew straight away when I was asked to do this pin design, I wanted to include something to do with Sir Captain Tom and the NHS. The rainbow around my pin represents the NHS and how much they have done for us, and the silhouette of a soldier represents Sir Captain Tom. I looked at all the previous designs that I have collected and noticed how many of them have got Smeatons Tower, so I decided to put it in the middle of mine to represent Plymouth. Finally, the colours on the 2021 banner doesn’t just represent the year it also represents the colours of the 3 services of the Royal navy, Royal Air Force and the Army. I really enjoyed this project and it was amazing news discovering that this design had been chosen for Armed Forces Day. It is great that both the NHS and our armed forces had been recognised in my design.”

Well done Sophie, we are very proud of your achievement. I had the pleasure on Wednesday of presenting James with a Headteacher Personal Achievement Award for the articles he has submitted below about his involvement with Junior Kart Racing.

We were both incredibly impressed by James and the work experience he has undertaken. Cleary being the best he can be. Plymstock School have been piloting a Breakfast Club. Coaches from Plymouth Argyle come and play football with our students and then they all sit down for breakfast. This is proving to be very successful and our students really appreciate this great start to their school day.

Well done to our students for getting here so early every morning and showing such commitment. All of the class have been AMAZING at starting their first BTEC assignment which is due in at the end of the week! They have worked well every lesson and have prepared PowerPoint presentations, as well as a script, which they will need to deliver.

All our nominees have demonstrated Endeavour, Resilience and Empathy; Plymstock School students striving to “Be the best you can be”. Well done to all who were nominated this week:

Brendan has been very busy working on his three sections for his Bronze award. For his ‘physical’ section he has been combining cricket with home workouts, mainly using weights, a rowing machine and exercise bike when at home with the goal of getting fitter and remaining active during Covid. For his ‘volunteering’ section he has taken on an eco-environment project from home.

Brendan commented ‘what we do is collect the food and then organise it at my house then arrange for it to be distributed. My goal is to reduce food waste by helping to arrange for surplus food from shops to be distributed locally, to share food with people who need it. Every week I go down to the collection point and collect the food, then I organise it, and prepare it for distribution.’ Finally, for his ‘skills’ section Brendan has been playing saxophone at home and has been having lessons at his music teacher’s house. His goal is to improve his saxophone playing. In Year 9, you’ll have the opportunity to sign up to do your Bronze Duke of Edinburgh’s Award (DofE).

The DofE is a chance to gain new skills and interests, get fit, have fun and broaden your horizons. And, when you complete your programme, you’ll achieve a highly respected Award that can help open doors in the future, whatever you’re hoping to do.

The DofE is non-competitive and open to all young people – it’s about setting your own personal aims, overcoming your own challenges, and pushing your own boundaries.
You’ll do four sections: Skills, Volunteering, Physical and your Expedition. You can choose your activities – either improving something you already do or discovering something completely new.

During, and in the aftermath of the COVID-19 pandemic, participants who complete their Skills, Volunteering and Physical sections will receive a special DofE Certificate of Achievement – a formal recognition, by the DofE, of the efforts you’ve made and the skills you’ve gained at this extraordinary time. If you go on to do your expedition, you’ll also achieve your DofE Award.

Click and follow this link to find out more: (Bronze), and please get in touch with me if you have any questions or would like more information about doing your DofE. Calling all staff and students – Are you up for a challenge?! ‘Do It 4 Youth’

Complete 4 fun packed DofE inspired challenges in 4 weeks. All in support of young people across the UK.

There are four DofE-inspired categories you can pick from when you choose your challenge – and you can even do all four if you’re feeling extra ambitious! You can choose challenges from four categories: Get Up (physical), Skill Up (technical) Free Up (willpower) and Hand Up (community). Whatever you choose, we’re sure that just like their Celebrity Captains, you’ll have fun, raise vital funds, and help give even more young people the chance to transform their lives.

The DofE have got some famous faces taking part in their ‘Do It 4 Youth’ challenge this summer. They’ll be joining thousands of people taking on a challenge to help young people from the toughest backgrounds across the UK to build life-long belief in themselves.

If you’ve not yet signed up there’s still time. Why not join them?

Sign up to the Do It 4 Youth challenge today to join their Celebrity Captains and thousands of others as we come together to transform the lives of young people across the UK. Challenge yourself and have fun this summer – take 2 minutes to sign up now.

You can do your challenge alone or with your mates – and start any time over the summer, as long as you’re all wrapped up in four weeks.

As a special thank you, the DofE will be sending everyone who takes part and raises £25 a free ‘Do it 4 Youth’ t shirt and if you raise £100 or more their very own specially designed Do It 4 Youth pin to wear. Plymstock School are supporting the Everyone’s Invited campaign by reminding all our students that any young person who reports that they have been affected by this issue will be supported in line with our existing safeguarding protocols. Students can contact their Head of Year, Assistant Head of Year or any of our Designated Safeguarding Leads to discuss any concerns that they may have about sexual harassment, assault or abuse.

These will be managed in line with the school’s Safeguarding Policy. Alongside this we already have a dedicated link to the NSPCC on our website and a range of other links to pages to support families and children. The NSPCC have also launched a dedicated helpline for children and young people who have experienced sexual harassment, assault or abuse at school, and for worried adults and professionals that need support and guidance, including for historic abuse. The Student Column’s TEACHERS OF THE WEEK: Volunteering is an unpaid activity you choose to do freely to support your community, an individual or the environment. However, volunteers also gain a lot of benefits for themselves too. Everyone has something to offer and can volunteer!

Find out more in this week’s Careers Insight below

Many thanks
Careers Team 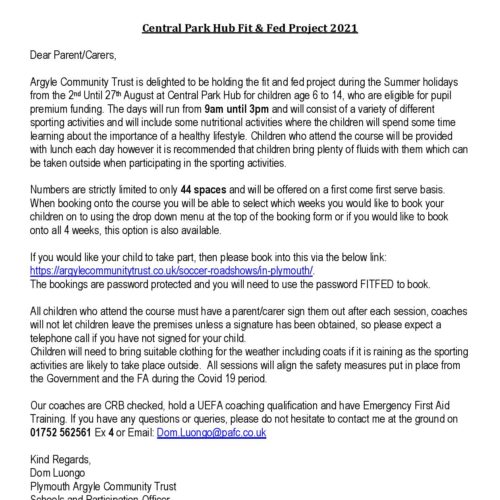 Next week an outdoor Skills Launchpad event is taking place from Wednesday 7 to Saturday 10 July outside of Barclays.

All four days will be focused on promoting all things Skills Launchpad and enabling all young people and adults to have a better understanding of the fantastic opportunities in Plymouth.

The flyer below highlights t themed days, specific to anyone interested in construction, care, hospitality and retail, or adult education.

Here’s the link to the full article: https://www.skillslaunchpadplym.co.uk/post/skills-launchpad-plymouth-to-host-four-day-event-in-city-centre-7th-10th-july There are no upcoming events at this time.

View the Calendar
Close
We use cookies to ensure that we give you the best experience on our website.We use cookies.Find out more